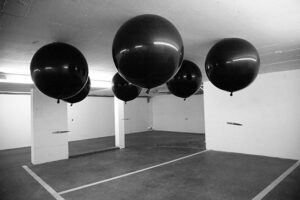 – It seems that the unstable equilibrium, caused by conditions that make possible its suspension together with a refined circular space that determines the features of the work My Country on My Back, alludes in the direction of a perpetual scale of attack – or defense – that are typically strategies of tension.

Driton Selmani’s black balloons, hanged in a state of suspension inside a former small church of the 13th century and visible only through a glass that blocks the access to the expository space by shaping its character, cast a shadow over collective rites, celebrations and childhood games.

The lightness of these balloons, and in contrast to the dimness of their material, is held by the brightness of craft made sharp blades that by slowly fluctuating in space, as willing to tell the brutality that can arise in the instinct on the human survival, seem ready to strike on the back. The linguistic game, that gives the title to the opera, exemplifies further the research of the young artist from Kosovo over the social-political matrix, with the only aim to analyze the juxtaposed meanings of space and time and to analyze the polarization between what is seen and what is hidden. In this case we deal with what is called interregnum, if we were to paraphrase one of Antonio Gramsci’s notorious concepts, thus with what is considered to be a suspended system in which we encounter “a variety of morbid phenomena”. Knives are an indication of some of these deformations that narrate over tautological conflicts, over vicious conflicts, and over wars among the kin: such ambiguities still, in the old order of things, remain inexplicable and from which the young cannot emerge due to economic, political, social and religious tensions that happen to be stratified in the collective memory of experiences, and where life of the individual remains suspended.

These suggestions, born through the direct experience of the artist during the recent historical events in his native country, have the capacity to put, in relation to one another, various geographical areas under a crisis that produces uncertainty and that extends, through the Adriatic Sea, to the entire European continent.